This morning I woke to the sounds of bagpipes, drums and military style marching chants that sounded so close that I nearly thought a parade was passing through my apartment.  Then as I looked out the window, one floor below, I realized that it was a historical reenactment parade for National Day of Catalonia, today, September 11th. Ah yes, I knew there was a reason why I should have closed my windows last night when I noticed a slight increase in the street sounds downstairs in my typically lively neighborhood, The Born.

I was aware that this day fell in September at some point as typically I’m not in Barcelona during the majority of this month, as I recalled seeing the independence protests on CNN and other news channels from whatever location I happened to find myself in the world.   Yes, I must admit, I know this day will be filled with protests for Catalan independence, as the Catalans have a reputation for being a protest happy bunch, but outweighing their protesting reputation is that reputation of being a lively group who enjoy celebrating, singing and dancing and of course their amazing local foods and wines.

So today, the “Diada Nacional de Catalunya”, since my daily routine has already been quite abruptly changed with sounds of historical Catalan soldiers nearly marching into my bedroom, I’ve decided, that if I can’t beat em, join em, kind of like the Catalans who were forced to join Spain in the end of their battle for independence against the Spanish monarchs on this same day in 1714.

Off to the streets I must head, avoiding all protests of course, but heading to a few of my favorite establishments where I can gather with Catalan friends and enjoy their amazing local foods and wines and plenty of JMFG Cava of course!

First Stop:  My favorite neighborhood restaurant, Bar Angel, C/ Ocata 2bis, (next to Estacion Francia) for a lunch of the best White Beans and Cod fish in town, along with a Pickled Vegetable Salad, while sitting bar side and chatting with Santi, my friend and the charismatic owner of Bar Angel. 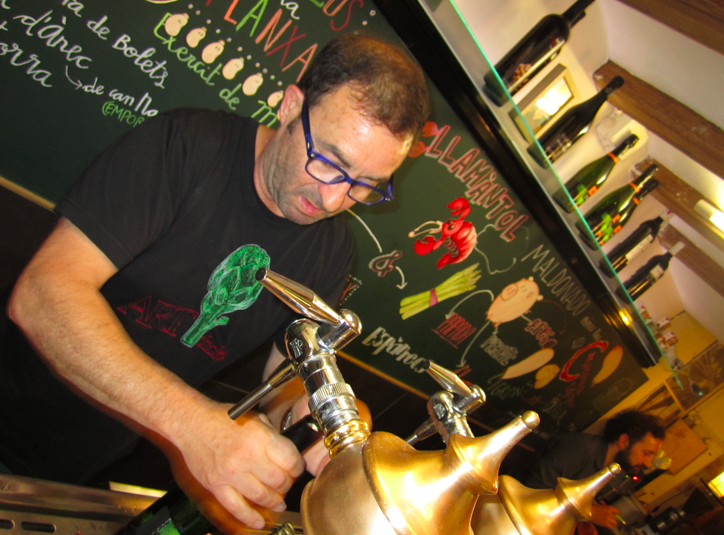 Second Stop:  After finishing off copius amounts of cava and delicious food at Bar Angel, a necessary stroll through the nearby Parc Ciutadela and up to the Arc de Trimof is a must.  This also happens to be where the majority of the cultural activities (live concerts, poetry readings, speeches of dignitaries) all will be happening today.

Third Stop:  El Xampanyet, c/ Montcada, 22.  The typical, family run Catalan tapas joint that has been an institution in The Born for nearly as long as it’s neighbor, the Picasso Museum.  I love hanging out around one of the wine barrel tables on the street by the entry way, as it’s prime people watching of those passing by and you have a bit more elbow room to enjoy the local canned seafood delicacies along with the house made Xampanyet, sparking wine.

Fourth Stop:  Take the scenic route and wonder around on foot through the gothic quarter, along Plaza Sant Jaume, passing the Catalan government buildings and through the alleyway that connects to the Cathedral of Barcelona then beyond to Plaza Catalunya, the city center.  More activities surrounding the day can be found here, but this could also border protest areas, so keep your eyes peeled.

Fifth Stop:  I’ll finish the day off by heading for the hills to the Gracia neighborhood and Taverna El Glop, C/ Sant Lluis, 24.  This is one of the top traditional Catalan restaurants in the city, where most dishes are prepared “a la brasa” or on an open fire grill.  Feast on a dinner starting off with Escaixada, the semi cured cod fish prepared with olive oil and diced tomatoes, and Escalivada, the roasted vegetables with traditional romescu sauce.  On this day of celebrating all things Catalan, the Butifarra, Catalan sausage is a main course must followed by a Crema Catalana for desert.

In the spirit of “If you can’t beat em, join em”, whether you’re visiting Barcelona on Catalonia National Day, or are an expat living here, head out for a day of “All Things Catalan”.  I guarantee that by joining in on the Catalan festivities that I’ve outlined, you’ll be able to partake in the best parts of their culture and avoid the messy protests, and in the end, have much greater contentment than the Catalans who had to join the Spaniards on this day in 1714.